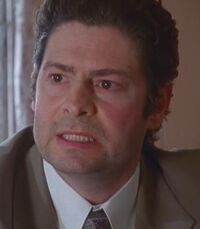 William Greeley was an actuary, before he quit. He had a brain tumor that affected his behavior. He spent most of his time at his house collecting sperm samples from himself.

Greeley trespassed federal grounds as part of an environmental protest. As a result he was arrested, but his charges were dismissed.

One night, Greeley picked up Connie Riesler to have sex with her. When Connie tried to put on a condom, he became aggressive and attacked her, trying to rape her. However, Connie fought him off and he left. After Connie identified Greeley's mugshot, Detectives Dutch Wagenbach and Claudette Wyms went to his house to arrest him. After breaking in, they found him sitting naked in the sofa with a jar on his penis. As they handcuffed him, Dutch found jars of semen inside a padlocked refrigerator. Greeley referred to them as "his children". He was arrested and taken to the Barn for questioning.

During the interrogation, Dutch started asking him about other murders that he suspected William had committed. Claudette told him not to steer away from the case. They later told him they knew about his tumor, and he told them he was saving sperm in case he became impotent. He argued that women needed him and his "seed" was important for him to disperse.

He later asked Dutch to leave him alone with Claudette. Dutch didn't want to, but Claudette signaled him to do it. As he flirted with her, he offered to impregnate her so she could have another baby. Instead, she pressed on the questions and Greeley finally accepted that he had raped 11 women with the intention of getting them pregnant. When he asked Claudette when they would consummate, she rejected him. When he tried to grab her, Claudette kicked him in the groin. He was taken downstairs to the cage.

Retrieved from "https://theshield.fandom.com/wiki/William_Greeley?oldid=13225"
Community content is available under CC-BY-SA unless otherwise noted.