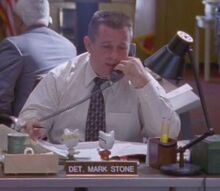 Mark Stone was a Los Angeles Police Department detective working at the Barn in Farmington.

Mark Stone was one of the original detectives when the Barn started operating.

Stone first appeared as one of the first detectives seen talking on the phone at the Barn in the background as Vic Mackey conversed with Wanda Higoshi. He was later seen still at his desk when Dutch Wagenbach and Claudette Wyms entered the station to follow up with Captain Aceveda on a new case. Stone was later seen that day helping an detective question an Asian suspect while Vic was seen being scoulded by Dutch over the usage of pranks in his desk drawer.

When Claudette gets a birthday present of dental cream in episode (''Our Gang'') he is working and laughing over her happy gesture.

In the episode Dawg Days he seems to have a minor presence working with some case files just before Dutch and Claudette head out to find the migrant worker.

When Dutch Wagenbach holds a small conference in the beginning of Cherrypoppers, Stone is seen sitting shortly out of a small frame and works over the bullpen flooding when the pipe in the bathroom bursts.

When David Aceveda calls Julien to his office in Throwaway about taking back his statement we see him in the bullpen.

When an drive-by shooter shot at the Barn from his car in episode Circles, Stone was one of the detectives that ran out with Captain David Aceveda to capture him.

He is seen working at his desk in episode (''Dead Soldiers'' ) when Dutch gets called to an active crime scene, Captain Aceveda also redirects Lanie Kellis to join him and steer her away from Vic's investigation case into Theodre Osmund about the arson.

In (''Partners'') seen from the long shot when Claudette implies about the struggle happening in Armadillo's place last night to Vic.

Receiving some paper work from Sergeant Black Officer ( background ), while Vic is joking with Aceveda fitting in with the Strike Team, (''Homewrecker'') one scene with Claudette profiling the suspect where Stone is seen wearing glasses this time.

After Little Pop stabbed Armadillo Quintero inside the cage, Mark Stone checked him for more weapons and took him away.

Agent Quigley coming in (''Playing Tight'') from Treasury Department asking for an available Detective to inform them that the Money Train cash is marked for tracing, then Stone reacting to call out by looking over the shoulder.

When Claudette is assesing and calculating her savings for retirement in Blood and Water, Stone is seen from the camera shot between the dialog of her and Dutch.

In episode Riceburner having some leisure time with other officers listening to the 911 comic tape. In episode What Power Is... Stone is working behind his desk when Dutch and Claudette are discussing their serial cuddler killer case. In Fire in the Hole he is wandering around the bullpen with some documents. Dutch commenting on Stone's behavior in episode ''On Tilt when Claudette's desk was spray painted. When Claudette is coming back from Victorville, she and Dutch noticed that her desk has been violated with spray paint, ''a cop? written all over it, Captain Aceveda dismissing her about dreaming to being a next captain of The Barn, Dutch asking everybody to go to hell including detective Stone who is laughing.

When new Captain Monica Rawling takes over the position after Aceveda heads off to politics of the police commision. Rawling seemed to have fixed the mens bathroom that Aceveda never did, he seemed to be overly jealous over that in the coming episodes of season 4. In episode "Grave" detective Stone appears to be exiting from the bathroom gloriously over the ending montage.

Prior to being gone as a screen presence after the last appearance his name tag is still seen in the episode (''A Thousand Deaths'').

Retrieved from "https://theshield.fandom.com/wiki/Mark_Stone?oldid=19665"
Community content is available under CC-BY-SA unless otherwise noted.