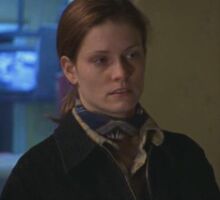 Connie Riesler was a prostitute and drug addict that lived in Farmington. She had a son named Brian.

Connie developed a strong friendship with Vic Mackey and usually gave him information for arrests. Mackey even tried to help her detoxify herself, but when she was unable to, she left her son with Mackey and disappeared. After that, she was arrested and managed to clean herself. She returned to the Barn and became a confidential informant for Mackey, but was murdered during a hostage situation.

Connie started having trouble with some Thai people, after she started taking their clients. When a fight ensued between them, Detective Vic Mackey intervened. After everything was clear, Vic gave Connie his number and told her to call him if she needed help.

When Connie was six months pregnant, she went into a hotel room and used crack. She then tried to give herself an abortion with some Drano and a plunger handle. In the midst of it all, she called Vic crying and screaming. When he found her, she was lying on the floor full of blood. Vic took her to Mission Cross Hospital where they did an emergency C-section, although she was ten weeks premature. Her son, who she named Brian, was born with an addiction problem.

After that, Vic kept watching Connie from time to time and checking on Brian. Occasionally, he gave her money for food and the baby. Connie continued to use crack and work as a prostitute for a pimp known as Ringo. However, she told Vic that she didn't use drugs when she was taking care of her son, and that her mother took care of the baby when she was working.

When Lionel Phipps tried to take over Ringo's business, Vic approached Connie for information. She then told them what happened between them. After being unable to put any charge against Lionel, Vic approached Connie again to see if she was willing to go to Lionel's house and plant a brick of crack. She agreed to and they gave her a purse with a false bottom and a transmitter to check on her.

Vic and Shane Vendrell took Connie to Lionel's house and told her to pretend she wanted to work for Lionel, and then plant the crack in his bathroom. When she told Lionel what she wanted, he told her he had to try her. Lionel then had sex with her during which he beat her. However, she managed to plant the brick of crack under his sink. When she walked out, Vic was angry at Lionel, but she told him it was ok. She then asked him for money to inject before going to her home.

Vic Mackey found Connie hanging at a park with Dmitri. After taking his money, Mackey dismissed her and tried to convince Connie to go to home and take care of her son. He later asked her for some information on Two-Time, and she told him that he was planning to have a party for some associates, and he asked for some of the best prostitutes. Mackey thanked her and gave her some money, and later pleaded with her to return to her home and eat something.

Several days later, Connie arrived at the Barn looking for Mackey. She claimed that a client slashed her with a knife and tried to rape her. Mackey handed the case to Detectives Dutch Wagenbach and Claudette Wyms. Eventually she identified a mugshot of a man called William Greeley. After they arrested him, the detectives asked her to wait at the precinct, but she became desperate. When she saw Mackey, she told him she was leaving, but he held her. While she waited, she asked him for some drugs. He took her to the clubhouse and told her to smoke by the window. After Greeley confessed, she left.

Mackey found Connie later while looking for the killer of Sally Struthers. Connie told him he had to lower her prices because of the scar that Greeley had given her. Mackey then asked her if she had some information about Sally. Connie didn't know anything, but told him that another prostitute named Tracy might know. She later went with a client from Fresno, who began acting strange during sex, and she ended up shooting him in the chest, thinking he was the killer that Vic was looking for. Not knowing what to do, she called Vic to help her. Desperate, Vic told her they had to fake the guy had hit her to justify her shooting him. Since she didn't have any bruises, she told Vic to hit her. At first, Mackey was unable to do it, but as she pressed on him, he hit her several times in the face. When the police interrogated her, she told them the client didn't want to pay and started hitting her, so she shot him.

Some time later, Connie was at a grocery store with her mom, who she had a stroke and died immediately. Desperate, Connie called Vic and he met with her at the place. As she fed Brian, Vic asked her what she would do without her mother to take care of the baby, and Connie assured him that she would clean up. When Vic suggested a rehabilitation center, she refused, arguing that they would take Brian away from her if they found out she was an addict. She then asked Vic to help her detoxify herself. Vic was reluctant at first, knowing it would be a hard process, but eventually agreed.

Vic took her to her home and suggested her to drink lots of fluids to keep her body hydrated. Vic also brought Ronnie Gardocki to take care of her, while he took Brian to Corrine. As she started feeling the effects of the detox, Ronnie tried to hold her down, but she hit him in the head. Vic then arrived and helped her as she vomited. After some time with her, Vic left again with Ronnie. After fixing herself a bit, she asked Ronnie to make her some tea. When he went to the kitchen, she took some money from his wallet and left. As soon as Ronnie noticed, he went to the Barn and told Vic about it.

Connie arrived at the Barn later that night, after she had some drugs. She apologized to Vic for not being able to clean herself. When Lem brought Brian to her, she refused to take him and told them she had come to make sure he would be okay. She then told them that any couple would fight for a "healthy white kid", and that she wasn't the right person to be her mother. Vic insisted that Brian needed his mother, but she left anyway.

After leaving Brian, Connie was arrested and spent 90 days in county jail. During that time, she managed to stay clean.

Connie went to the Barn and asked Officer Paula for Vic Mackey. Paula told Vic, and they met in the entrance. Connie told Vic about her time in jail and how she was clean now. When Vic asked her what she wanted, she told him she wanted to work as his informant. Vic was reluctant, but when she told him she needed the money he agreed. As a sign of good faith, Vic asked her for a tip to prove how useful she could be. Connie then told him that she knew a kid named Felipe Gomez was dealing heroin to kids at school.

Later, when the tip proved correct, Vic brought Connie a C.I. contract and explained that she would be expected to bring four tips every month, for which she would get paid $2,000. Vic also warned her that she had to stay clean because she would be drug tested randomly.

One night, Connie came to the Barn with another tip. When Vic told her she could've called for it, she asked is she could see her son, Brian. Vic told her that wasn't possible, but she argued how she was clean now. Vic explained to her that Brian was now with a new family, and that she had to move on. Resigned, Connie asked Vic for some advance money on the tip she gave him. Vic took out some cash and gave it to her.

Some days later, Vic told Connie to ask around if any prostitute had seen a Dorea Pinchuk or a Mike Holden, both of whom might be involved in a series of murders and a kidnapping. Sensing it was a big case, Connie asked Vic if her tips would be considered more valuable. She also requested Vic for a bonus because she was considering to buy a home. Vic told her to bring whatever she could find and he would try to help her. Connie also saw that the reward was up to $5,000.

Later that day, Vic found Connie in a corner and she told him that a friend had seen Mike. She told her that the man was a regular client usually taking two girls: one to babysit his son. Vic then told her to keep finding information.

Without telling Vic, Connie waited until Mike approached her and she volunteered to go with him. Mike, who was with Dorea, took Connie to an apartment building at 1530 Los Prisa and told her to take care of his son. While Mikey slept, Connie called Vic to inform him of the situation. When Vic found out that she was with the murderer, he ordered her to get out with the kid. At this moment, Mike walked in the room and asked her who she was calling. Connie told him she was setting up her next date. Mike then took her into the room telling her that Mikey would continue sleeping.

Shortly after, Mike heard the police outside and took Connie as a hostage. When Vic approached the window, Mike used Connie as a shield. Vic dropped his weapon and walked in the apartment. As Vic tried to negotiate with Mike, he appeared to be calming down. However, in one moment, he bursted with anger again and threw Connie to the wall, and shot her in the abdomen. Mike was shot awhile after by Shane Vendrell and an LAPD sniper.

After her death, the state wouldn't put up the money for a decent burial for Connie, so Vic decided to put the money himself in the episode Barnstormers.

Connie is only briefly mentioned because Vic Mackey visits his son in the foster care home in episode Bottom Bitch, he wanted to know if his son made any progress or made any friends and also alleges the foster parents for putting all the money aside but them saying they guarantee the basic needs for the children. Another hooker Farah mentioned her name to Vic getting his somewhat attention to save her from the abusive pimp.

Retrieved from "https://theshield.fandom.com/wiki/Connie_Riesler?oldid=19025"
Community content is available under CC-BY-SA unless otherwise noted.