Back in the Hole

Edit
"Back in the Hole" 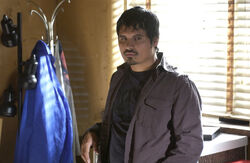 "Back in the Hole" is the tenth episode of Season 4 of The Shield. It was originally broadcast on May 24, 2005. The previously on segment is voiced by Michael Jace.

Vic and Monica try to get Antwon to admit he was involved in the cop killings; Monica is shocked when Vic and Shane confront her with information about Angie's body.

Episode title both refers to finding Angie's dead body where she is supposed to be buried and Antwon Mitchell getting suppressed to confess about the cop killings through his imprisoned son or linking him and the others responsible for such act as in heading back to prison also in slang called the hole.

Community content is available under CC-BY-SA unless otherwise noted.
Advertisement